This is only one of many things you can do in Far Cry 5.

Fishing. Who’ve thought that fishing would’ve made it into the long running Far Cry series, and above all; be something that adds to the series. But the fishing is only a small part of this new installment. Far Cry 5 takes place in Montana, in the isolated Hope County that’s become overrun with a terrifyingly powerful doomsday cult. You play as a customized character who’s a deputy of the Hope County’s Sheriff’s department, which does make it slightly more difficult to become invested in the story since there’s no real background to the character in which you make but certain players can create their own backstory to their particular character. However the real show stealers for this game are the antagonistic cult leaders. Much like two previous installments of the series, the most interesting characters are the bad guys. They are always full of their own quirks and dangerous levels of instability. Instead of there being one main antagonist and a handful of their lackeys, this one group consists of a cultist “family” of sorts, where each one controls a certain region of Hope County. The family is known as the Seeds; Joseph Seed, known as the Father to the cult is the whole head of the operation. John Seed, who’s the main propergana master who recruits the population (often forcefully) with brainwashing and threats. Jacob Seed, the one in charge of building up the Cult’s military power with loyal cultists and experimental animal soldiers. Faith Seed, who uses a highly potent and addictive drug that comes from a specific flower known as the “Bliss”. Each one of these people have a huge control over the cult and aren’t shy of using it to maintain a foothold. However, all of their work, outposts and devoted followers start to fall once the game gets into gear.

The battle of Fall’s End shows just how dangerous this cult can be, and how hard the townsfolk are willing to push them out.

It starts off with an attempted and then botched arrest of Joseph Seed at his compound, with the protagonist and a US Marshal narrowly escaping the cult. After meeting one of the side characters of whom are fighting against the cult, they task you with liberating their small island as a sort of tutorial. Once the island is freed from the Cult’s grasp you’re free to explore the rest of the county. The interesting thing about the whole setup of the story is that it can be played out however you want, missions aren’t linear nor are they fully required to do in order to liberate the regions. It’s a very, “Go-where-you-please” approach to the genre, almost hailing back to Far Cry 2 where you could choose who to work for in what order. The main ways of liberating the regions are to take over cult outposts, complete story missions, destroy cult property, free civilians (some of who give you information on outposts, missions or prepper stashes) or kill VIPs wandering the place. The dynamic gameplay also helps since player choices on how to approach these missions does leave things open for variation. And when you get bored or need some money, you can always go looking for the prepper stashes, hunt animals for skins to sell or even, as I said before, fish. 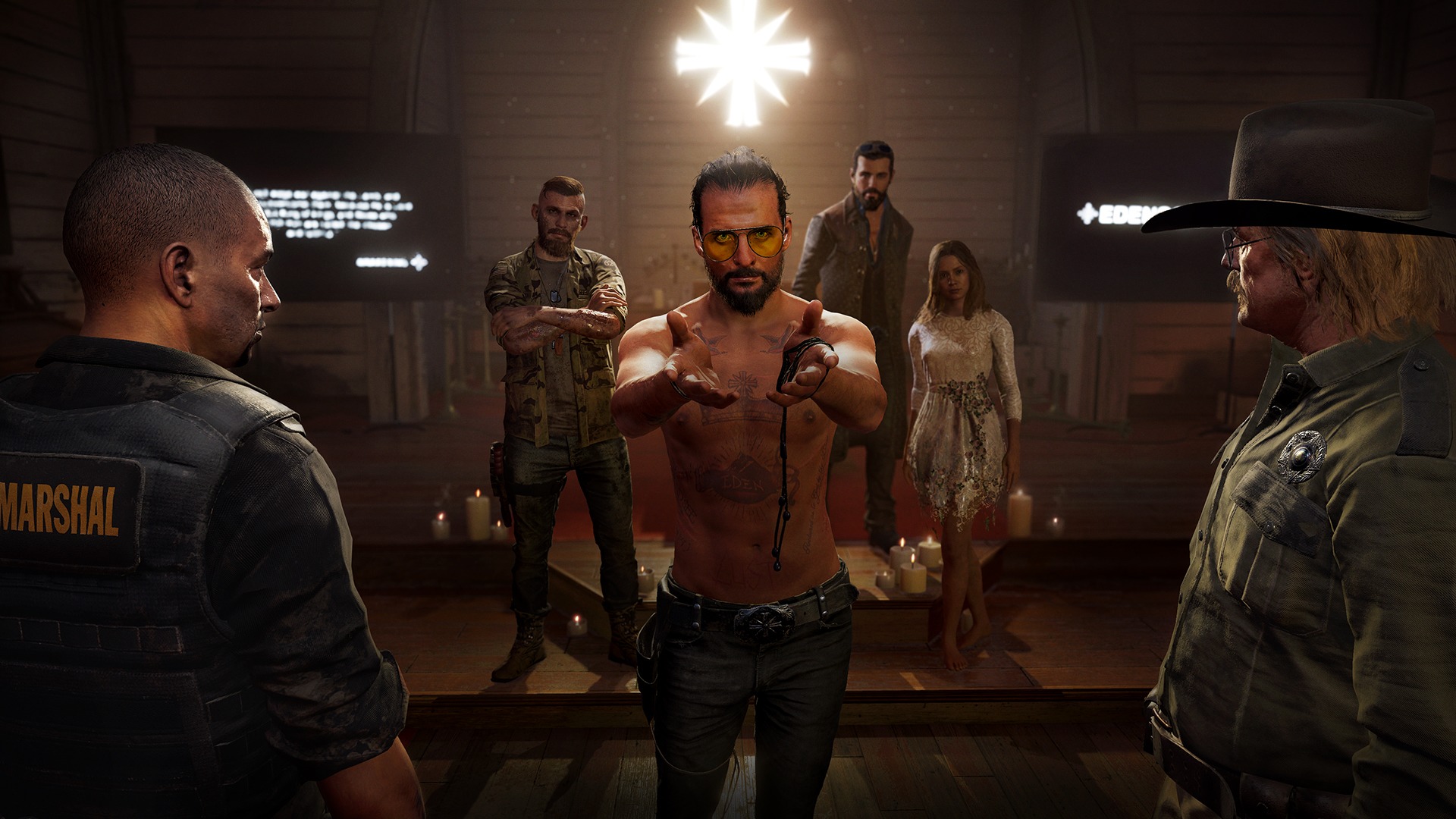 However for some, tackling these objectives may be somewhat challenging, but there are perks in which can enhance the character you make ranging from health boosts to the ability to purchase more lethal types of ammunition. And if that’s not enough, there are nine specialist combat characters of whom you help and in exchange they will join you on whatever adventures you take in Hope County. You can also hire three additional support units who also help out but they don’t have the same interesting abilities or interactions with one another like the specialists. For the specialists you have a lovable and playful dog. A pilot with a combat modified seaplane. An ex-military sniper. A tamed cougar. A slightly incompetent rocketeer. A vengeful archer who can give Katniss a run for her money. A sort of circus bear that has diabetes, because cheeseburgers. A pyromaniac and cousin to the rocketeer. And a helicopter pilot with a rather ill tempered manner against the cult. Each of these specialists has their own personality and with the ability to have two at a time (upon unlocking it from the perks) the interactions between them is both interesting and humorous. Not only that but they prove to be invaluable during intense firefights with them able to take on targets at their own volition or whatever you mark. Your canine companion will occasionally fetch a weapon for you, and yes, you can pet him.

One of the series more interesting features is the variation of weapons within the game. However there’s quite a lack of interesting weapons, specifically when it comes to the rifles and handguns. The melee weapons though there were many to choose from but they mostly act the same way both used normally or when thrown, aside from the shovel which can be tossed like a spear making for some amusing kills. The last couple Far Cry games had interesting weapons and a fair number of them, in Far Cry 5 there’s very little variation but each one feels powerful and can be outfitted with attachments such as scopes, suppressors, extended magazines and different skins. With seven rifles to choose from, six of which consist of normal and tactical versions, there’s little in the way of buying what you want. There are handguns as well but with four of the same caliber of revolvers, just slightly different looks to each one. A few different types of SMGs can be bought in game as well, some of which are more powerful than rifles. There’s a decent selection of shotguns but only one worth using, the Spas-12. There are also two different types of machine guns and bows along with flamethrowers, a slingshot, a small handful of sniper rifles and specialist weapons with fancy paint jobs and minor stat boosts. While I found this to be rather lazy, there was a wide selection of vehicles to choose from. They consisted of ground vehicles, boats, helicopters and most interestingly, planes. Most of the ground vehicles can be customized with colors and features, the aircraft though cannot, but the most useful ones are those which are equipped with machine guns, rocket pods and bombs so choosing the unarmed variations would be pointless since you can get suddenly jumped by the cult’s air force. Surprisingly the air combat is very intense and fluid. It is satisfying to bring down enemy aircraft with a burst of machinegun fire.

As with many of the Far Cry Games, when everything is said and done and the final confrontation approaches, there’s always a duel choice system. But getting there to me felt rather rushed, I’ve played the last few Far Cry games and for some reason this game took a much shorter time than previous installments. From what I can gather, the mix of non-linear missions did bring about some confusion but the map size was also a factor since it’s much smaller than the previous two games but it allows you to travel between the three regions, doing whatever missions you see fit. Even though there are is a very large number of main missions and side missions, several consist of fetch quests or drawn out tutorial missions that aren’t obvious to be tutorials. However despite all of this, I enjoyed the game very much and can see myself playing it again in the future at some point. Though there is one question that remains, after one of the endings, what’ll be in store for the next potential Far Cry game?

Oh yeah, there’s DLC missions and such coming up soon too. No idea what they could contain but the comics you collect could shed light on it.

Lewis is a current student at Rowan University. When he isn't working, Lewis spends his time writing stories, playing video games or visits his place of employment to gain more work hours so he can expand his firearms and video game collections.